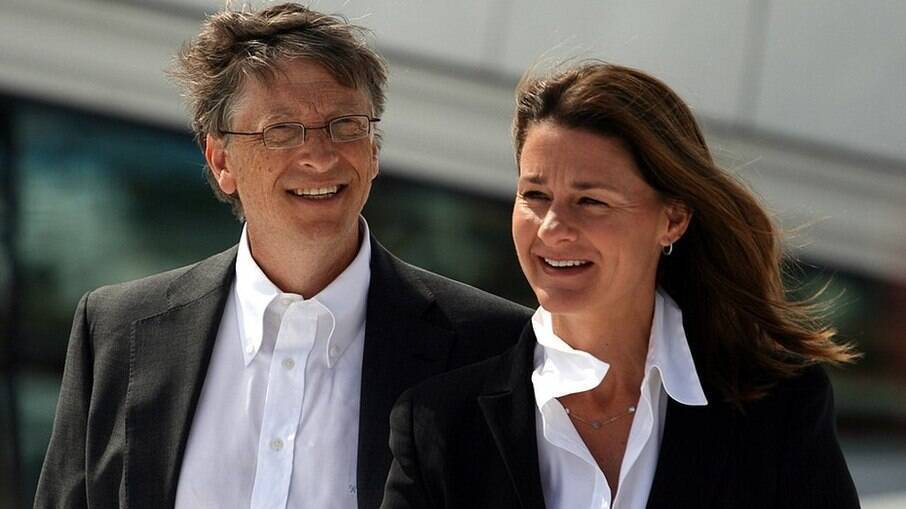 Bill Gates just announced his divorce from his wife, Melinda Gates, after 27 years of marriage.

Bill and Melinda Gates. Justin Sullivan/Getty Images
How big the settlement could be: The details are still unknown but it could reach $73 billion.

Bill Gates is the fourth richest man in the world and has a net worth of $146 billion, according to Bloomberg. The pair met while they were both working at Microsoft in 1987, and they have since collaborated on a number of philanthropic efforts including their joint foundation. According to Forbes, their shared charitable foundation has a trust endowment of $49.8 billion.

What exactly will happen to their finances is still unknown. But the Gates family resides in Washington, one of nine states where residents can receive a 50/50 split of marital assets. While that is not mandatory, it suggests Melinda Gates could walk away with as much as $73 billion in assets. Each of the three Gates children is already set to inherit $10 million, with the rest of the couple’s wealth going to charity.

According to TMZ, the couple had a separation contract, not a prenuptial agreement, prior to filing. A separation agreement is a non-legal document that lists a couple’s rights and obligations, including child support and custody, and is signed without involving a court.

According to Insider, in the divorce filings, the couple asked that their real property, personal property, and debts to be split according to their separation contract. Melinda Gates did not ask for spousal support, which could indicate the large sum of money she will receive from other assets.

What went wrong: In a tweet, Bill Gates announced the couple’s divorce on May 3.

“After a great deal of thought and a lot of work on our relationship, we have made the decision to end our marriage,” Gates wrote. “Over the last 27 years, we have raised three incredible children and built a foundation that works all over the world to enable all people to lead healthy, productive lives.”

“We continue to share a belief in that mission and will continue our work together at the foundation, but we no longer believe we can grow together as a couple in the next phase of our lives,” the statement continued. “We ask for space and privacy for our family as we begin to navigate this new life.”

According to the TMZ report, the divorce filings claimed that the Gates’ marriage was “irretrievably broken.” Melinda Gates was listed as the petitioner and Bill Gates as the respondent, with a trial date set for April 4, 2022.

Jeff and MacKenzie Bezos separated after 25 years of marriage, making her the second wealthiest woman in the world at the time.
jeff bezos mackenzie bezos

Bezos is the richest person in the world, estimated to be worth over $177 billion, according to Forbes. Bezos’ home state prior to his divorce is in Washington, which happens to be one of nine states where residents are entitled to a 50/50 split of marital assets.

The couple finalized their divorce in July 2019, leaving MacKenzie Bezos, now Mackenzie Scott, with a partial stake in Amazon worth an estimated $38 billion. At the time, she was named the second wealthiest woman in the world. After the divorce, Jeff Bezos’ net worth still stood at an estimated $121 billion. Scott’s current net worth is now listed at $53 billion, according to Forbes, making her the third richest woman in the world.

According to CNBC, the couple never signed a prenuptial agreement.

What went wrong: In a lengthy tweet, Jeff Bezos announced the world’s wealthiest couple was ending their marriage amicably after a quarter of a century. In their statement, Jeff and MacKenzie Bezos shared their decision came after “a long period of loving exploration and trial separation.”

The two said that they would remain friends and a family with their four children. However, there was apparently more to the story as mere hours after the couple announced their split, the National Enquirer broke the news of a relationship between Jeff Bezos and his girlfriend, former TV anchor Lauren Sanchez.

A lengthy investigation was launched into how the photos and texts were leaked, and even if it was a politically motivated attack on Bezos and Amazon. A New York Times report suggested that Sanchez sent them to her brother, Michael Sanchez, who then sold them to the National Enquirer. Bezos later claimed that the material was used to extort him.

Bezos and Sanchez are still dating. Mackenzie Scott married science teacher Dan Jewett in March 2021. They live together with her four children.

What went wrong: After 32 years of marriage, the Murdochs called it quits in 1999. Of the $1.7 billion in assets Rupert gave to Torv, $110 million was in cash, according to ABC News.

After the split, Rupert was married just 17 days later to 30-year-old Wendi Deng, whom he met while married to Torv. Murdoch filed for divorce from Deng in June 2013.

“I think that Rupert’s affair with Wendi Deng – it’s not an original plot – was the end of the marriage,” Torv told Australian Women’s Weekly in 2001. “His determination to continue with that. I thought we had a wonderful, happy marriage. Obviously, we didn’t.”

“[He] was extremely hard, ruthless and determined that he was going to go through with this, no matter what I wanted or what I was trying to do to save the marriage. He had no interest in that whatsoever,” she added of a possible reconciliation.

What went wrong: Robert L. Johnson and Sheila Crump built their fortune together over 33 years of marriage from 1969 to 2002 with BET, which Robert Johnson founded in 1980. BET sold to Viacom for $3 billion, according to Fortune.

Crump said in 2004’s “The Billion Dollar BET” that Robert had a three-year affair and at least one other.

What went wrong: Gibson told Deadline the pair separated in 2006 the day after he was arrested in Malibu for an investigation of driving under the influence which infamously led to Gibson’s expletive-ridden anti-Semetic tirade.

Moore filed for divorce in April 2009, citing irreconcilable differences. A month earlier, Gibson was spotted with singer-songwriter Oksana Grigorieva, with whom he had a child in October of that year.

The couple’s prenup reportedly entitled Moore to half of everything Gibson earned from their marriage starting in 1980, according to People. It’s estimated Moore received about $425 million. The pair, who were married for nearly 30 years years, have seven children together.

What went wrong: Michael married Juanita Vanoy during his second season with the Chicago Bulls in 1989 in a small Las Vegas wedding.

Vanoy filed for divorce in 2002, but the couple decided to try and work things out instead. At the end of 2016, the Jordans decided to split for good after 17 years together. According to People, the divorce came as a surprise to some friends since the two were seen spending time together in the days beforehand, attending their son’s basketball game.

The couple’s lawyers released a statement saying the two “mutually and amicably” ended their marriage.

What went wrong: Singer Neil Diamond and then-wife Murphy divorced in March 1995 after 25 years of marriage. Forbes reported Diamond’s $300 million estate was divided up, with Murphy receiving half.

In 1996, Diamond said he blamed himself for much of the relationship going south.

“I assume a lot of responsibility for what went wrong, but I was taken aback by how many friends dropped me,” he told People.

“She got enough to live on for the rest of her life,” he said, according to the Daily Mail.

What went wrong: After Woods crashed his Escalade into the tree outside his Florida home in 2009, the golf star admitted to multiple affairs. The two announced their divorce in 2010 after six years of marriage.

Nordegren received a reported $110 million in the settlement, according to the New York Daily News.

What went wrong: A California judge refused to recognize the couple’s prenuptial agreement scrawled on a napkin and awarded Irving $100 million after the four years of marriage in 1989, according to Forbes.

Irving told the Los Angeles Times in 1994 their ambitious careers may have got the best of them.

“During my marriage to Steven, I felt like a politician’s wife,” said Irving. “There were certain things expected of me that definitely weren’t me. One of my problems is that I’m very honest and direct. You pay a price for that. But then I behaved myself and I paid a price too.”

Harrison Ford and Melissa Mathison separated in 2000 after 17 years together.
harrison ford melissa mathison
Settlement: Between $85 million and $118 million

What went wrong: Harrison Ford and screenwriter Melissa Mathison were together for 17 years. They first met on the set of “Apocalypse Now” in 1979.

The pair separated in 2000 amid reports he was seeing a younger woman.

“We have been living apart for the past month,” the couple said in a statement released November 2000. “We sincerely hope that we can work out our differences.”

Madonna and Guy Ritchie ended their relationship after being married for just under eight years.
madonna guy ritchie
Settlement: $76 million to $92 million

What went wrong: The director and singer called it quits in 2008 after being married for just under eight years.

In 2011, Ritchie opened up about the divorce in “Details” magazine saying he felt like he stepped into a soap opera but that he didn’t regret his time with the singer. Madonna later told Newsweek that the spark went out in their relationship.

“It’s not as romantic as it used to be. You think, ‘This isn’t what I thought it was going to be,’ and ‘How much am I willing to sacrifice?'” Madonna said.

Madonna’s publicist told the Associated Press the divorce settlement would be at least $76 million.

What went wrong: Costner and Silva met at California State University in 1975 and married two and a half years later. They announced their divorce after 16 years of marriage in 1994.

According to People, Costner reportedly had a wandering eye and Silva wasn’t a fan of his “s* roles” and she made an ultimatum to stop doing them or quit the movie business.

“We have amicably resolved all issues regarding our children and financial affairs and a full marital settlement has been reached,” Costner and Silva said in a statement.

During that time, Costner starred in hits “Dances with Wolves” and “The Bodyguard.”

An Open Letter to Young People Planning To Marry Someday

It’s never okay for the person we are considering teaming up with for the rest of our lives to hurt us. Puzzle pieces are cool because they sort of police themselves. Even though several pieces might look like they’ll fit together, they usually don’t, and even if they do, it’s easy to spot the problem […]