A few years ago, Kami Rita Sherpa, a veteran climber and guide, met with a gruesome sight at Mount Everest Base Camp. Human bones poked from the ground, smooth and ice-crusted.

It was not a fluke. Subsequent seasons yielded more remains — a skull, fingers, parts of legs. Guides increasingly believe that their findings fit into a broader development on the world’s highest mountain: A hotter climate has been unearthing climbers who never made it home. 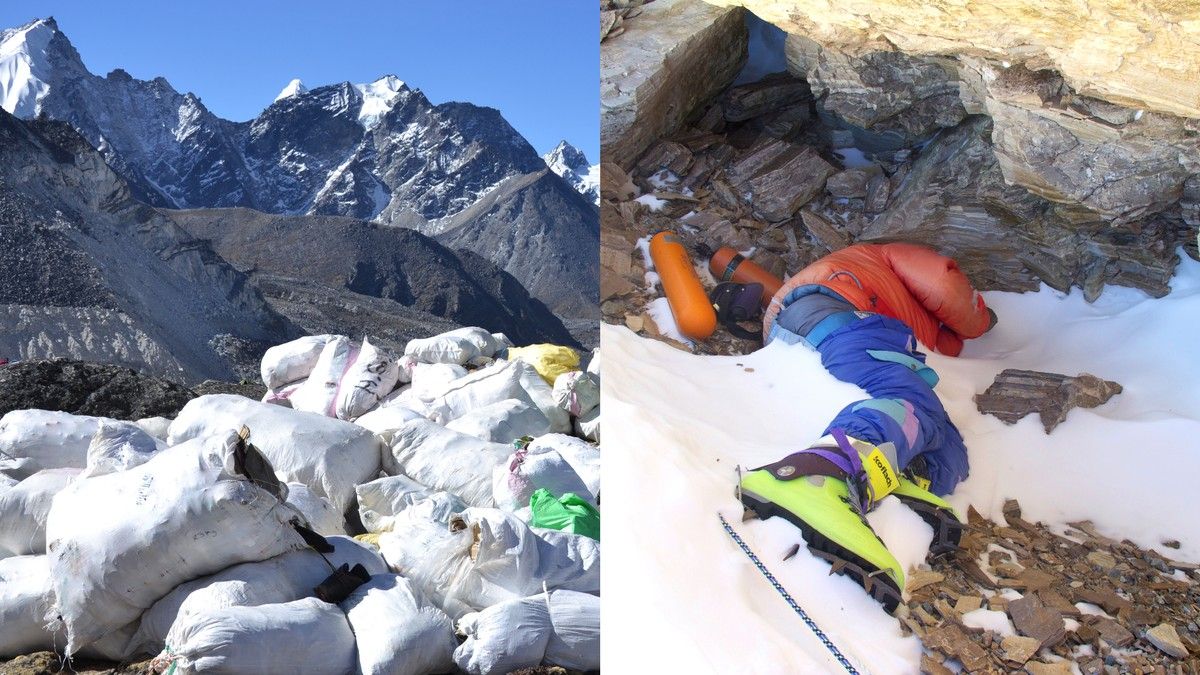 “Snow is melting and bodies are surfacing,” said Mr. Sherpa, who has summited Everest 24 times, a world record. “Finding bones has become the new normal for us.”

In the last few seasons, climbers say they have seen more bodies lying on the icy slopes of Everest than ever before. Both the climbers and the Nepalese government believe this is a grim result of global warming, which is rapidly melting the mountain’s glaciers and in the process exposing bones, old boots and full corpses from doomed missions decades ago.

The Nepalese government is struggling with what to do. More than 100 bodies may be lying on Everest, and there is an open debate about whether to remove them or leave them be. Some climbers believe that fallen comrades have become a part of the mountain and should remain so. A number of the bodies are remarkably well-preserved: Sun-bleached parkas outline faces frozen into the color of charcoal.

Gelje Sherpa, a guide and six-time summiteer, said that when he first climbed Everest in 2008, he found three bodies. During a recent season, he saw at least twice that number.

“They often haunt me,” he said. 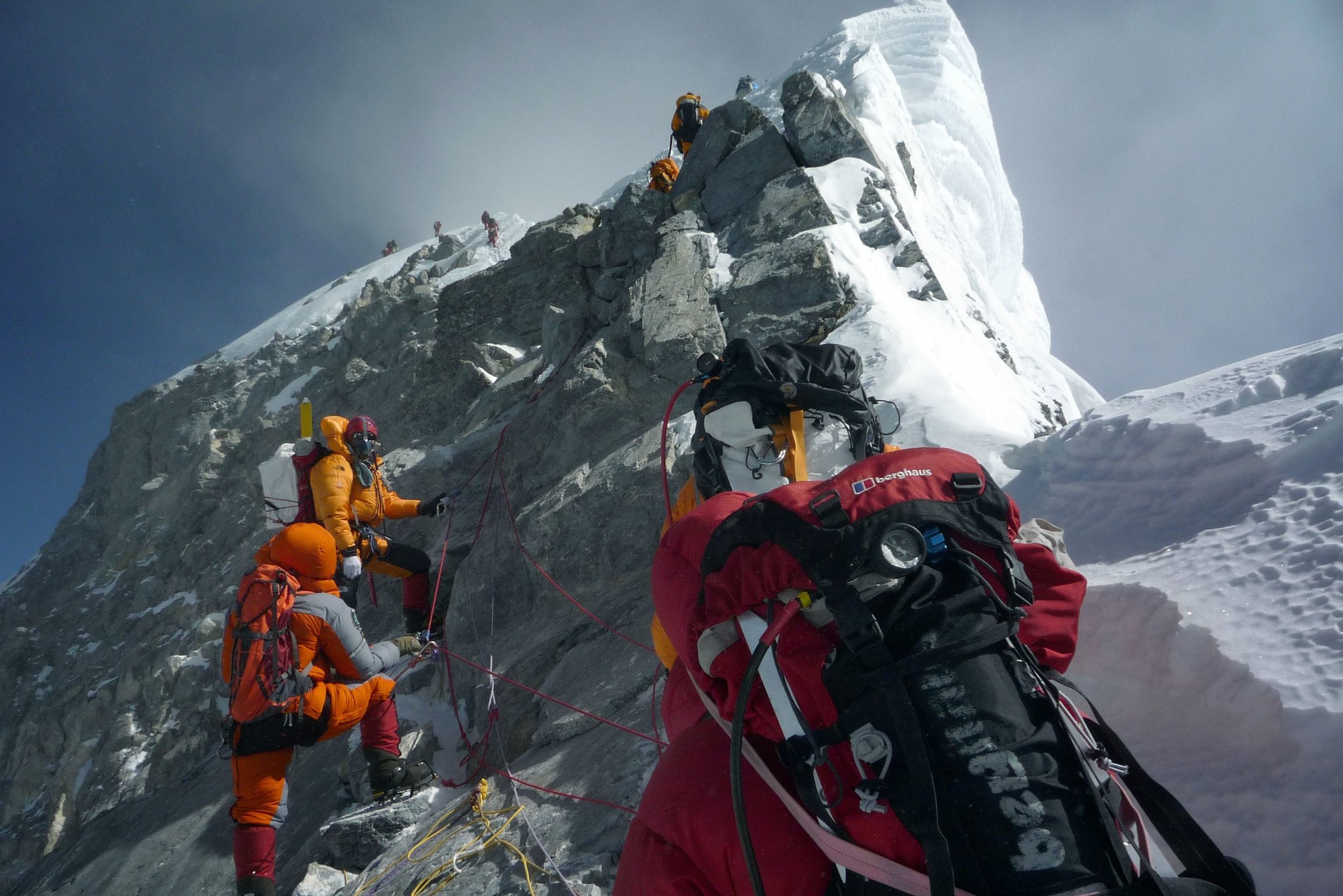 This has been one of the deadliest climbing seasons on Mount Everest. With at least 11 deaths, many expert climbers are criticizing the number and experience level of hikers allowed on the mountain.

Loads of people died this year, everyone knows, and it’s been a carnage. And I should say it has become a death race there because there was massive traffic jam. And people are pushing themselves who are not even capable of doing it. They do it. They tried to summit and instead of summiting, they kill themselves.

1:58‘It’s Been a Carnage’: Scenes From Mount Everest
This has been one of the deadliest climbing seasons on Mount Everest. With at least 11 deaths, many expert climbers are criticizing the number and experience level of hikers allowed on the mountain.CreditCredit…Agence France-Presse — Getty Images

The Nepalese government said Wednesday that to avoid traffic jams and unruly behavior at the summit, it was considering changing the rules on who could climb the mountain.

Ang Tshering Sherpa, the former president of the Nepal Mountaineering Association, estimated that the bodies of at least a third of all who have died on Everest remain there. Some of them are in pieces, pulled apart by avalanches, he said.

It is very dangerous to remove remains from the top of the mountain. A frozen body can weigh over 300 pounds. To carry that extra weight over deep crevasses with precipitous drops and erratic weather would put even more climbers in life-threatening binds.

Still, some families have insisted on recovering the bodies of their loved ones, which entails a separate mission that can cost tens of thousands of dollars. Generally, the bodies of climbers who die above 21,000 feet are left in place.

“On the mountain, everything is weighed against the risk of death,” Ang Tshering Sherpa said. “It is better to bring down the bodies if possible. But climbers should always give first priority to safety. Dead

bodies can claim their lives.”

(Guides in the Himalayas are often called Sherpas, though not all are part of the Sherpa ethnic group, from which many take their surname.)

The snow line on Everest is higher than it was just a few years ago. Areas once coated in dense ice are now exposed. Climbers are trading ice axes for rock pitons, spikes that are hammered into cracks on the mountain wall.

In 2016, Nepal’s army drained a lake near Everest after rapid glacial melting threatened to cause a catastrophic flood downstream. This year, a study found that the size of ponds on top of glaciers across the Everest region — which can both signal melting and accelerate it — had greatly increased in the last three years, far outpacing the rate of change from the first decade and a half of the 2000s.

Kami Rita Sherpa worried that scaling Everest, which sits near a major glacier and straddles the border between Nepal and Tibet, was becoming more complex — a troubling development as the mountain continues to be commercialized and to attract inexperienced climbers.

“It will be harder to summit in the coming days if the ice continues to melt,” he said.

The forecast looks grim. In a study on high-altitude warming released in February, scientists warned that even if the world’s most ambitious climate change targets are met, a third of Himalayan glaciers will melt by the end of the century. If global warming and greenhouse gas emissions continue at their current rates, the number could jump to two-thirds, according to the report, the Hindu Kush Himalaya Assessment.

The report touches on elevation-dependent warming. It is well known that temperature changes from greenhouse gases are amplified at higher latitudes, such as in the Arctic. But there is growing evidence that warming rates are also greater at higher elevations.

In October, a landmark report from the United Nations’ scientific panel on climate change found that if greenhouse gas emissions continued at the current rate, the atmosphere would warm by as much as 2.7 degrees Fahrenheit (1.5 degrees Celsius) above preindustrial levels by 2040. Under the same scenario in the Himalayas, that figure could reach 3.8 degrees Fahrenheit (2.1 degrees Celsius), the Hindu Kush Himalaya Assessment found. 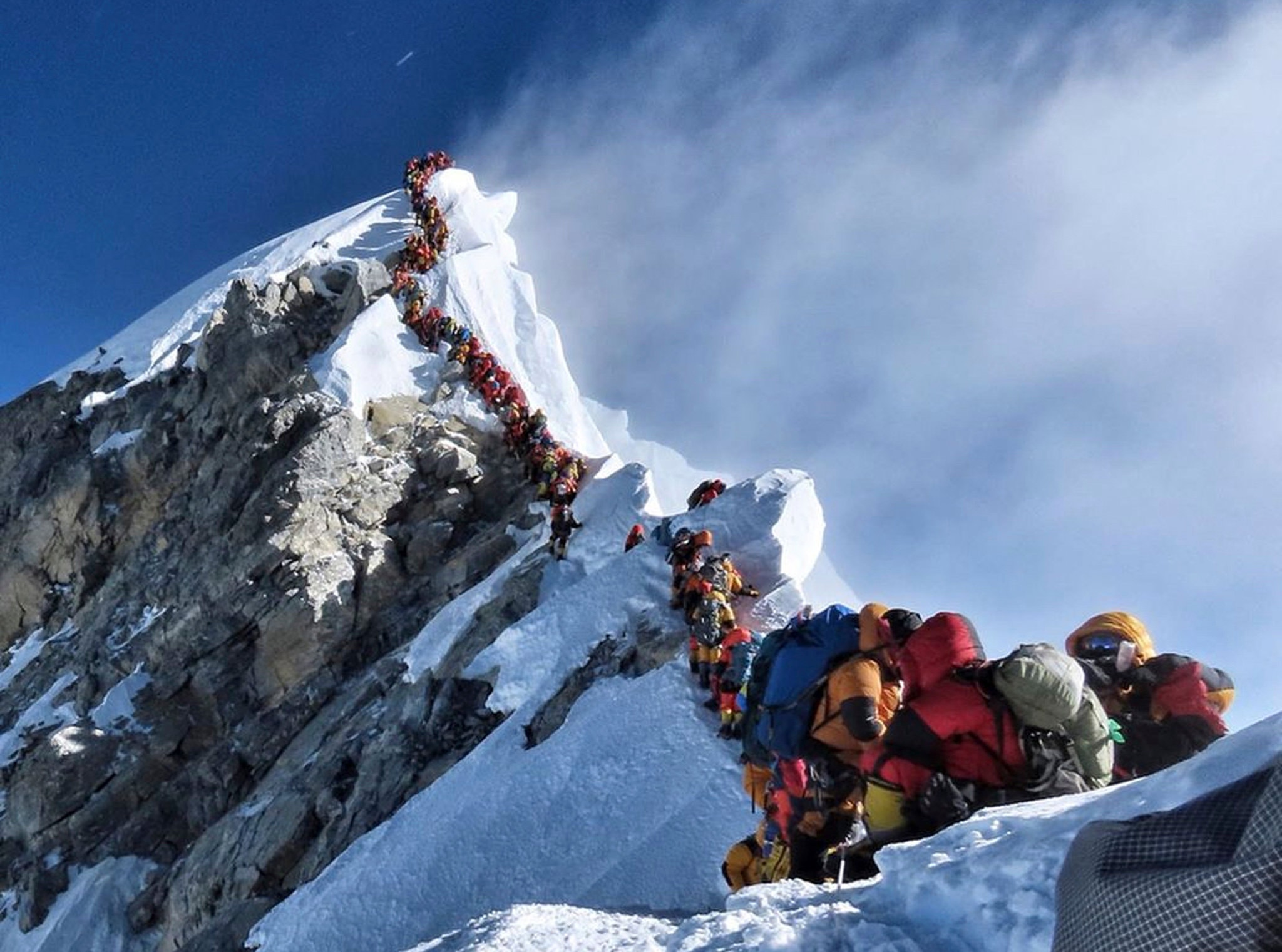 The growing number of climbers has caused congestion at the summit of Everest.Credit…Nirmal Purja/@Nimsdai Project Possible, via Associated Press

Ahead of this year’s spring climbing season, which typically stretches to the end of May, Nepal’s tourism ministry asked expedition operators to compile lists of deceased mountaineers who were left on Everest and other peaks.

This year, volunteers have collected more than 20,000 pounds of trash — plastic bottles, old ropes, tents, food tins — from Everest. The exercise was also billed as an opportunity to remove bodies. In April, four more unidentified people were found on the mountain.

Mr. Ghimire said that the remains had been moved to Kathmandu for autopsies. If they cannot be identified, the police will cremate them.

“We will absolutely bring down all objects that have emerged from the ice,” he said.

Their work is unlikely to extend to the upper reaches of Everest, where summertime temperatures routinely dip below zero degrees Fahrenheit (nearly minus-18 Celsius) and oxygen levels are a third of those at sea level. At that altitude, some bodies have become sobering markers.

For years, an American woman who died while descending was a fixture near the summit, until a climber wrapped her body in a flag and moved it out of sight in the 2000s. The body was commonly called Sleeping Beauty.

At 27,900 feet above sea level, people have also trudged past “Green Boots,” a body curled under a limestone rock and named for the climber’s neon-colored footwear. The body is thought to be that of an Indian mountaineer who died in 1996 during the blizzard that inspired the best-selling book “Into Thin Air.”

For many climbers, the bodies are a jarring reminder of the mountain’s perils. Vibeke Andrea Sefland, a Norwegian climber, said that during her 2017 expedition she had passed four bodies, including a friend’s.

“It for sure affects me,” she said. “It is very intense when you meet them for the first time, when your headlamp catches them. I always halt and give them a little prayer.”