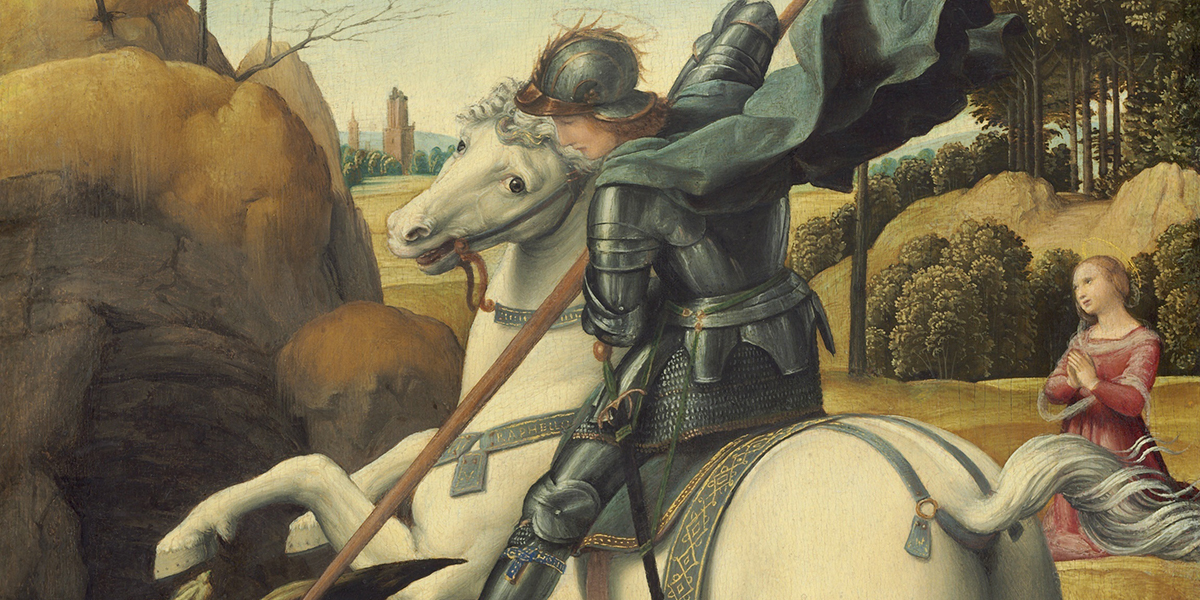 The story of St. George reminds us that these 3 virtues will help us conquer our own dragons.
Field trips are a thrill for my homeschooled kids, and they were especially excited to visit a local art museum after we spent hours poring over a children’s guide about it.

I encouraged them to prepare for the trip by making a list of which works of art they most wanted to see.

“I know what I want to see!” my 6-year-old exclaimed. “St. George killing the dragon!”

I smiled, knowing exactly why, out of all the paintings in the children’s guide, he chose that one. One of our family’s favorite books is an exquisite retelling of St. George and the Dragon, replete with evocative illustrations and a truly thrilling narrative.

We’re hardly alone in taking to heart this story. The legend of St. George and the Dragon has been known and loved since the 12th century.

The funny thing is that the story isn’t strictly true, at least not as we think of it. The historical St. George was an officer in the Roman army who most likely never encountered a dragon. Instead, the dragon in the story was meant to symbolize Satan or evil more generally.

Yet the popularity of the legend has only grown through the centuries. What is it about this tale that captures our imaginations so completely?

We can turn, as in so many things, to the wisdom of C. S. Lewis and G. K. Chesterton. Both were outspoken advocates for fairy tales and seemed to have an intuitive sense of what kind of stories children enjoy.

Lewis wrote, “Since it is so likely that children will meet cruel enemies, let them at least have heard of brave knights and heroic courage.”

The story of St. George and the Dragon gives form and substance to the intangible reality of evil. This means that St. George’s triumph is also the triumph of Christ. It’s the oldest story in the world, and one that’s still being written every day, again and again, in our own lives.

My favorite line from the Saint George and the Dragon book comes as George is preparing to fight the dragon. He sees a vision of a “high city” that symbolizes Heaven, and naturally, he longs to go there. A holy hermit tells him,

That High City that you see is in another world. Before you climb the path to it and hang your shield on its wall, go down into the valley and fight the dragon that you were sent to fight.

Each one of us has our own dragons that we were sent to fight. We all have a calling God has placed on our lives to fight a particular battle. Our dragons are both internal, as temptations to sin, and external, as difficult circumstances of various kinds.

The story of St. George reminds us not to give up hope. Like the holy warrior himself, we are called to fight our dragons with all we’ve got. And like him, with Christ’s help, we can defeat them.

To defeat our own dragons, we can seek to imitate these 3 virtues of St. George:

1
COURAGE
Courage is not the absence of fear but feeling fear and choosing to do the right thing anyway. According to the legend, an entire city lived in fear of the dragon before St. George came along and rose to the challenge. He was the only one brave enough to do what had to be done. Like St. George, we can face our dragons with courage, choosing what’s right even when it’s hard and scary.

2
COMPASSION
The legend holds that St. George volunteered to kill the dragon not because he was in any danger himself but to protect the innocent lives of other people. There’s also part of the legend that says the king of the city rewarded George with many riches, but George turned around and promptly gave them to the poor. These actions remind us of Christ’s generous love for us and inspire us to imitate them.

3
PERSEVERANCE
The legend tells that St. George was almost defeated several times, but he never gave up. He persisted repeatedly, and conquered in the end. So we can try again, even when things seem hopeless.

Like St. George, we are all on our path to the “High City” glimmering in the distance, and his story reminds us of what it takes to get there. When we someday approach its pearly gates, we can hope to say with St. Paul and in imitation of St. George, “I have fought the good fight, I have finished the race, I have kept the faith” (2 Timothy 4:7-8).

They say that animals choose their owners, and that is very true. Sometimes, we can see reports of people who fell in love with animals who decided to accompany them in different places and others who simply decided to make their homes their home. The story of this couple is no different – Rodrigo Coelho […]

Study Shows The More You Hang Out With Your Mom, The Longer She’ll Live

Inviting Grandma over for dinner may actually extend her life-and increase its quality-a new study shows. Researchers at the University of California, San Francisco found that loneliness plays a large role in the decline so often associated with old age. The study followed 1,600 adults, with an average age of 71-despite controlling for socioeconomic status […]