Capturing photographs in nature is one of my favorite things to do. Not just because I enjoy photography either. We live in such a busy and chaotic world that we need to take the time to stop, enjoy and capture a moment in time with the hope of it bringing us back to sanity. There is so much beauty in nature we fail to notice because we, so easily, get caught up in our day-to-day routine. A photograph in nature can bring you back to a time and place when something amazing and pure happened. I came across a photograph from a P.E. teacher in Finland named Valtteri Mulkah. He has been photographing Finland’s countryside and wildlife for about 6 years now and came across something truly magical. Something pure, wild and free. Something that grabbed my attention immediately and inspired me to look more into the story behind an incredible series of photographs.

Valtteri was exploring the lush green forests around the Finnish town of Martinselkonen when he stumbled upon a group of bears in a clearing ahead of him. 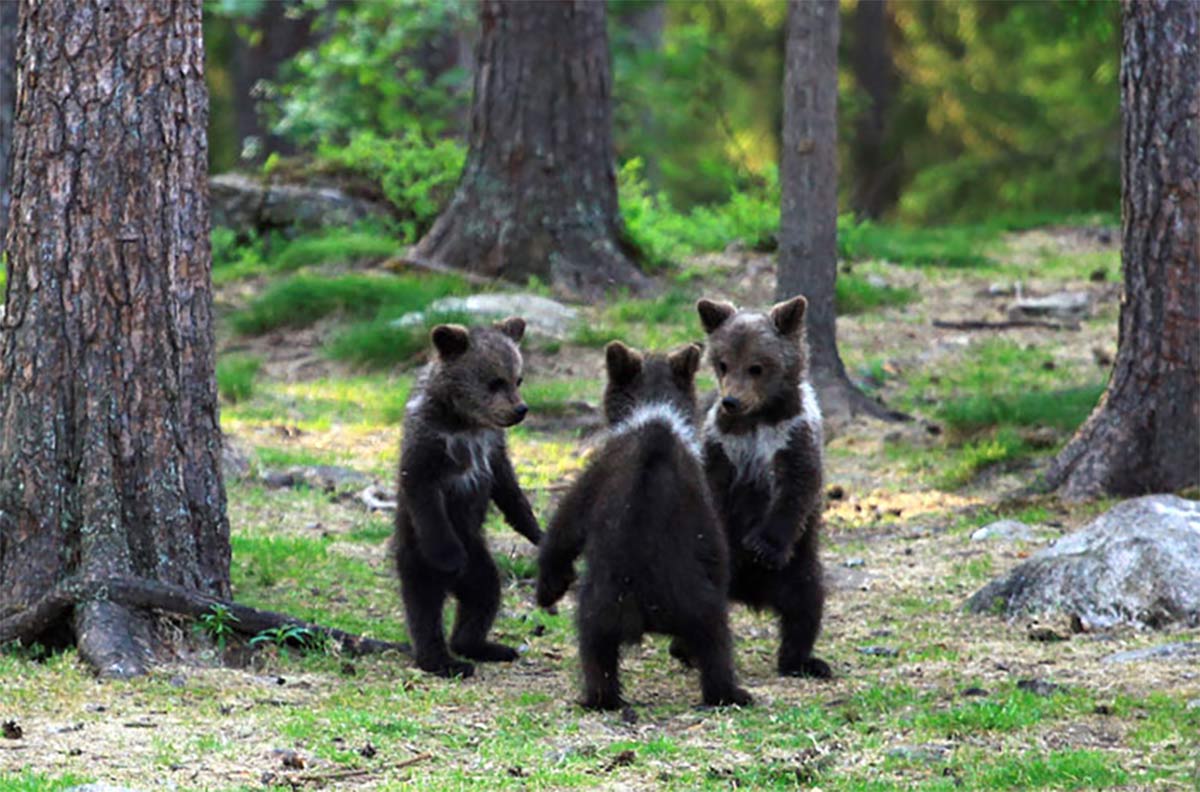 He saw three baby bear cubs and a mother bear nearby. He was roughly 150 feet away from the animals and stayed as hidden as possible to see what could possibly unfold. It was a daring risk but he is very comfortable outdoors and it paid off big time.
Man Finds Baby Bears Dancing Like Human Children In The Forest

Seeing a bear in the wild is a treat in itself but seeing baby bear cubs is especially rare and something not many people get to experience. If anyone does see baby bear cubs, their very protective mother is usually very close.

Momma bear was walking around foraging for a snack while the baby bears did what baby bears do best. Valtteri said “the cubs behaved like little children. They were playing, and even started a few friendly fights. I felt like I was on a playground in front of my house, where small children frolic around. That’s how much they reminded me of little children. At one point, the three of them got up on their hind legs and started pushing each other. It was like they were dancing in a circle.”

These little bear cubs started an adorable dance party out in the woods! Of course not thinking anyone was watching let alone taking pictures! Valtteri was in for a treat and lucky for us, he captured the entire experience with his camera.

Have you ever seen anything so innocent and pure in your life?

I love that mama bear is standing by while her little cubs have the best day ever dancing and playing in the woods.

Valtteri stated that he stayed with the bear family all day and into the night photographing them and studying their playful behavior.

The fact that he was able to get so close without being smelled or seen is incredible. Bears typically do their best to avoid contact with humans.

These little guys might have been too busy playing and dancing to notice but I wouldn’t want to be there if momma bear caught a scent of me.

Valtteri lives in a wildlife paradise and it would be hard not to adventure with a camera every single day. I can see why this is such an important hobby to him.

It proves that young bears are just like young children who just want to play, eat and nap.

Capturing bears with your camera in the wild is something that not many people get to experience. Let alone in the wild forest surrounding Finland. This is something professional wildlife photographers dream of and this P.E. teacher from Finland just happened to stumble upon it. The little white collars on these bears and them playing/dancing in a circle reminds me of the little Grateful Dead dancing bears. Absolutely adorable!

Worst of Covid-19 yet to come, WHO warns

The WHO assures that it is not time to lower your arms or when some countries report a drop in infections The director general of the World Health Organization (WHO), Tedros Adhanom Ghebreyesus, warned this April 20 to the international community that the Covid-19 pandemic is far from over and, on the contrary, “the worst […]

Like “Ahab and the white whale”, man hunted missing daughter for 12 years

Greg Allen’s obsession with finding his missing daughter began more than a decade ago, when the mother finally made good on a threat and fled with the daughter from Texas to Mexico, according to him and authorities. Sabrina Allen was a month away from turning age 5, and the visit with her non-custodial mother, Dara […]