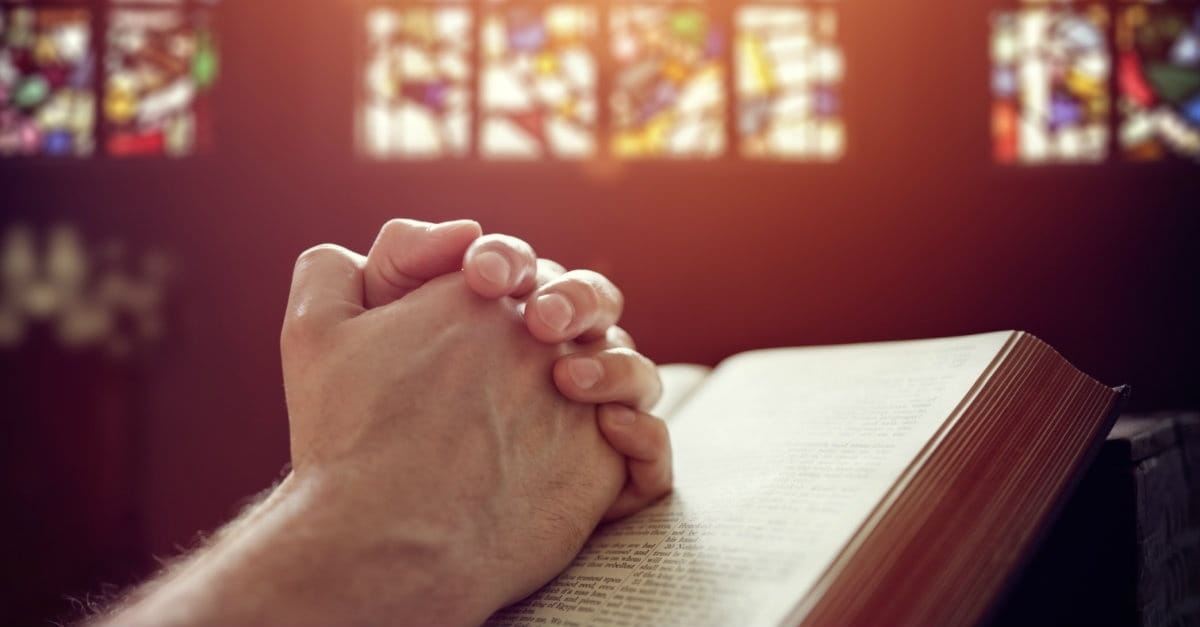 James 2:19 says, “You believe that there is one God. You do well. Even the demons believe—and tremble!”
Begin Again

Our generation needs to revisit the basic truth about where we came from. Did we create ourselves? All that we attribute to man’s innovation and inventions were inspired by God’s creation, created using raw materials He made, created using the laws of the universe that He set in place and created using the creativity, intelligence, giftings and abilities that He gave each individual. Is there anything man created without using a single thing that was created by God or works outside His principles for the universe?

We would do well to give Him the reverence and honor that is due to Him. In Malachi 1:6, God says, “‘A son honors his father, and a servant his master. If then I am a Father, where is My honor? And if I am a Master, where is the [reverent] fear due Me?’ says the Lord of hosts to you, O priests, who despise My name. You say, ‘How and in what way have we despised Your name?‘”
miro.medium.com/max/2400/1*MxmGR1bH2baUpyiQhAG3Uw.png

Obey God with all your heart
Did God mean what He said?

The serpent said to Eve, “Has God indeed said, ‘You shall not eat of every tree of the garden’?” And then he said, “You will not surely die.” (Genesis 3:1,4) Satan made Eve doubt what God said. The truth is that what God said came to pass! Every single man and woman has since died. The only One Who died and conquered death is Jesus Christ, His Son.

Through Jesus, we have been set free from the curse that came when Adam and Eve distanced themselves from God. Today, we celebrate and rejoice at the gift of salvation we have received and with it all the good things that are in our lives, thanks to Jesus!
Forgetful People

The problem is that we forget that Jesus paid a huge price to get us forgiveness for our sins and yet we continue to live in our old sinful ways. It is just like giving your dog a bath and wiping him clean just to see him run into the muddy ditch the very next moment and get dirty again!

The same thing was repeated with Sapphira, his wife. Acts 5:10-11 says, “Then immediately she fell down at his feet and breathed her last. And the young men came in and found her dead, and carrying her out, buried her by her husband. So great fear came upon all the church and upon all who heard these things.”
Why Bother?

Imagine how a holy God must feel when He sees His children on earth think it is okay for them to do what He said is wrong and even have the audacity to think that God will overlook all those sins because He loves them! God paid the ultimate price – He sent His Son Jesus to die on a cross so we could be free from those very sins!
When Terror Fell on People

It is time to revisit Acts and see how swiftly God’s judgment came on Ananias when he lied, Acts 5:5 says, “Upon hearing these words, Ananias fell down and died. And great dread and terror took possession of all who heard of it.”

Many people like to take things easy thinking there will be a lot of time to get right with God before they die. Most have the idea of spending more time in scriptures when they are old and retired. But how do you know whether you have ten years, five years, one year, a few months or just hours left to live?

Luke 12: 20-21 tells us about the rich man who kept heaping up possessions thinking he had laid up provision for many years. “But God said to him, ‘You fool! This very night your life will be demanded from you. Then who will get what you have prepared for yourself?’ This is how it will be with whoever stores up things for themselves but is not rich toward God.”
The Second Coming of Jesus

A lot of people scoff at those who speak about the Second Coming of Jesus. In 2 Peter 3:3,4 it says, “To begin with, you must know and understand this, that scoffers (mockers) will come in the last days with scoffing, [people who] walk after their own fleshly desires. And say, Where is the promise of His coming? For since the forefathers fell asleep, all things have continued exactly as they did from the beginning of creation.”

All those who believe that Jesus won’t come again need to remember that they have only one lifetime to live. They might die at any time between now and the time Jesus really comes. They will be judged by the Lord for the sins they commit in the life they are leading now. If they do not come to their senses, repent and correct themselves, there is no hope for them for God is a righteous and just Judge.

Fear God and Keep His Commandments
A Grave Warning

2 Peter 2:20-22 says, “For if, after they have escaped the pollutions of the world through [the full, personal] knowledge of our Lord and Savior Jesus Christ, they again become entangled in them and are overcome, their last condition is worse [for them] than the first. For never to have obtained a [full, personal] knowledge of the way of righteousness would have been better for them than, having obtained [such knowledge], to turn back from the holy commandment which was [verbally] delivered to them. There has befallen them the thing spoken of in the true proverb, The dog turns back to his own vomit, and, The sow is washed only to wallow again in the mire.“

Jesus warned us in Matthew 10.28 saying, “And do not be afraid of those who kill the body but cannot kill the soul; but rather be afraid of Him who can destroy both soul and body in hell (Gehenna).”
Leaders Be Warned!

God will judge those who do not know Him differently than those who know Him. Luke 12:48 says, “But he that knew not, and did commit things worthy of stripes, shall be beaten with few stripes. For unto whomsoever much is given, of him shall be much required: and to whom men have committed much, of him they will ask the more.”

A word of caution to those who look up to human leaders in the church or the Body of Christ and place them on a pedestal. Please do not place any man on a pedestal, for there is only one sinless Man and that is Jesus. The rest of us are all weaker beings. 2 Corinthians 4:7 reminds us, “However, we possess this precious treasure [the divine Light of the Gospel] in [frail, human] vessels of earth, that the grandeur and exceeding greatness of the power may be shown to be from God and not from ourselves.”

When we look up to someone and later learn they had fallen and sinned, the disappointment and grief we feel can cause us go away from the Lord Himself. Why should we allow the sins of a fallen leader or fellow believer become the reason for the sacrifice of our Lord Jesus to go in vain? When we stand before God we are not going to be asked about the sins of others, we will be asked only about our own sins.
Live Blameless Lives

While a lot of times we harp on being human and use it as an excuse to allow sin to prevail in our lives, let us remember the attitude Joseph had when Potiphar’s wife enticed him to sin. He said, “He is not greater in this house than I am; nor has he kept anything from me except you, for you are his wife. How then can I do this great evil and sin against God?” Genesis 39:9

It is good to remember that there were others like Joseph in human history who have lived righteous before the Lord. The Bible tells us about Enoch – who walked with God (Genesis 5:24), Samuel the prophet – none of the words he spoke fell to the ground (1 Samuel 3:19), Daniel – went to great lengths to ensure he didn’t defile himself (Daniel 1:8) and Job – God Himself testified that he was blameless and upright (Job 1:8). We must also seek to live righteous lives like they did and not grieve the heart of our Lord by continuing in our sinful ways.

Numbers 32:23 reminds those who sin, “that you have sinned against the Lord; and be sure your sin will find you out.” We are exhorted several times in the New Testament to “be pure and blameless for the day of Christ.” (Philippians 1:10) 1 Thessalonians 5:23 says, “Now may the God of peace himself sanctify you completely, and may your whole spirit and soul and body be kept blameless at the coming of our Lord Jesus Christ.”

A Drop in the Ocean
Just One Life

Luke 1:8 asks a very valid question, “Nevertheless, when the Son of Man comes, will he find faith on earth?”

Ecclesiastes 12: 13,14 says, “the end of the matter is: Fear God [revere and worship Him, knowing that He is] and keep His commandments, for this is the whole of man [the full, original purpose of his creation, the object of God’s providence, the root of character, the foundation of all happiness, the adjustment to all inharmonious circumstances and conditions under the sun] and the whole [duty] for every man. For God shall bring every work into judgment, with every secret thing, whether it is good or evil.“

One lifetime is like a drop in the ocean when compared to eternity. What we do in this lifetime defines where we will spend eternity. Fear God, live right before Him because He can see your very heart and hear every thought, and hear every word before you utter them. He needs no statement from anyone else about us because He Himself witnesses everything and knows the exact truth about each of us.

Jesus says in Revelation 22:12, “Behold, I am coming soon, bringing my recompense with me, to repay everyone for what he has done.“ May we get right with God and live our lives revering and honoring Him for He is truly worthy of it.

Miss Universe Singapore Bernadette Belle Ong has traveled to Florida, USA for the 69th Miss Universe which will take place on May 16, 2021. Bernadette is close to the hearts of Filipinos because she was born in the Philippines and lived in our country for ten years so she speaks Tagalog fluently. Bernadette’s family migrated […]

Science says this is the most beautiful woman in the world

The perfect face Supermodel Bella Hadid has been declared the most beautiful woman in the world after she passed a science test that determines what constitutes the ‘perfect face’. 94.35% accurate to Phi The 23-year-old was found to be 94.35% ‘accurate’ to the Golden Ratio of Beauty Phi – a measure of physical perfection. All […]